Before Beatrix was born, I looked forward to the challenge of doing ministry as a family.  As with almost everything, I was (and probably still am) overly idealistic.  I want her to be a part of the work we are doing, and to be able to carve out her own ability to contribute in a way that works with her developmental level and personality, instead of just being here because her parents are here.  I guess that means that I’m going to have to get over not wanting anyone to touch her because they might be carrying something she’s not vaccinated against yet.

In the meantime, I’ve been trying to figure out what kinds of things I can do with her at this age, needing at least some of my attention almost all the time.  So when our team has to get minor, boring things done like writing out a staff application, I jump at it like the overenthusiastic kid in the front row (“Oh, oh, pick me!”)  And I feel a little selfish taking all the easy, fun tasks.  But its been mostly things like that, that I have been able to contribute to our team the last months: things that can be done mostly on my own, often in small chunks as I have a free moment, and that don’t have a swift deadline.

Last weekend, I got to do something a little more.  I went into Kigali to teach for a morning.  So Beatrix and I went in together (she did pretty well on the bus), and she stayed with me while I taught.  It was basic teambuilding/icebreakers for the new DTS, so I wasn’t just standing in front of the class talking the whole time: there was lots of moving around and time for me to interact with her.

She spend most of the morning on my back.  We both like that a lot: its comfortable, she’s not too heavy to carry for long periods of time, and she sleeps quite happily there.  An added bonus is that its very similar to how most women here carry their babies, so it makes us a little less strange.  The few times I was at the front talking, she decided she wanted to talk too.  🙂  She was excited to see all the new friends, but I did manage to convince her to sleep for part of the class. 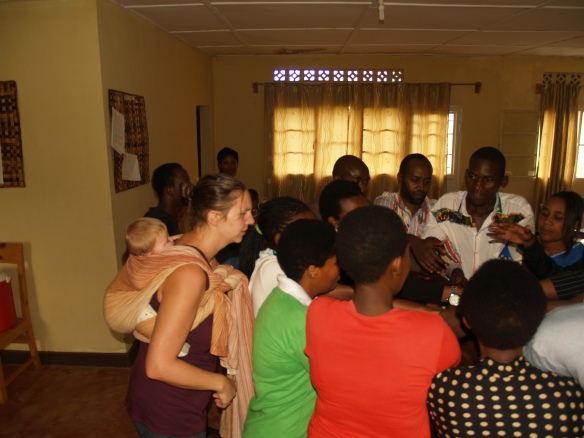 I’ll be going back to teach for a week in  a couple months. (But we will have someone with us to help care for her, for the times when its just too much for her. HOORAY for visitors, and more on that at a later date.)   This was an encouraging trial run, and it was great to be able to take her with me.