In addition to actually doing stuff here, Mike & I want to be to facilitate exposure to missions.  We like to have people come visit us!  After staffing Discipleship Training Schools, I have wanted to be able to spend more time one-on-one with people, having them experience missions with us: spending time in our home, doing what we do with us, and facilitating opportunities for them to do what they are passionate about in a foreign context.  I’ve had a few opportunities to do that over the years, but having our own house has made it possible in a whole new way.

We have at least one person staying in our house for all but a few weeks since the beginning of December.  So far, we’ve had a total of  6 people stay with us, with one more visitor expected before the month is out.  A couple have been friends (currently involved in long-term missions) coming to hang out and be spoiled for a couple days with running water and chocolate cake.  The other 4 have been people looking to see what we are doing and/or learn more about missions.

Our first guest arrived before our guest furniture was even ready – so she slept on the couch for most of the time, and then happily helped assemble the bed when it arrived. 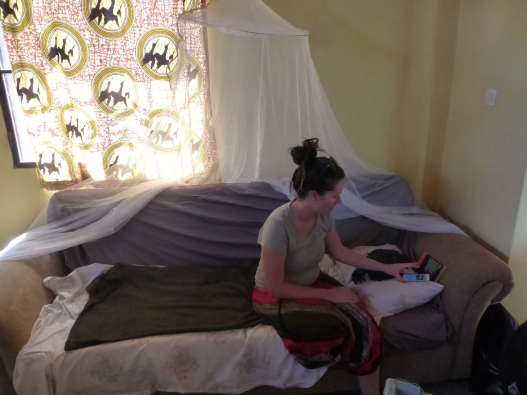 (Well, she was happy about it, anyway.)  She is the sister of our sister-in-law.  🙂  When we heard she was coming to a neighbouring country for the practical part of an agriculture course she was taking, we said, “Come visit, and see what Mike’s doing in the gardens.”  She actually did!  It was great to have her here! She helped Mike with a few things in the gardens, including pruning back a mango tree that is flourishing now. 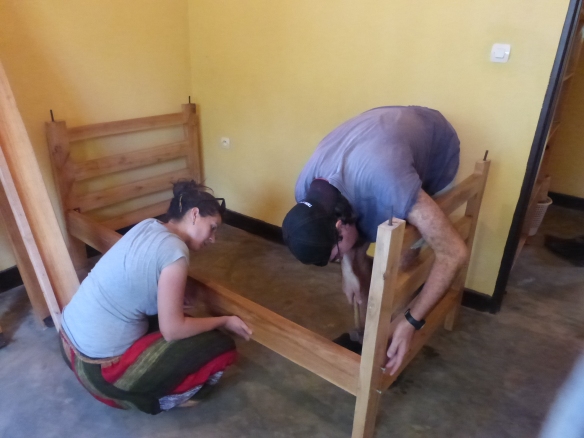 This isn’t IKEA furniture, people.  If I remember right, there was a fair amount of swearing as they attempted to assemble, quit, then re-attempted and quit again, several times before finally drilling new holes and pounding it together.

So far, we’ve had a total of  6 people stay with us, with one more visitor expected before the month is out.  A couple have been friends (currently involved in long-term missions in the region) coming to hang out and be spoiled for a couple days with running water and chocolate cake.  The other 4 have been people looking to see what we are doing and/or be involved in missions.

Last year, we had two young women express that they wanted to come and stay with us for around 2 months each.  Tahlia we have known since she was small, and she plans to spend her life involved in missions somehow.  For several years now, we have been telling her she should come and spend some time with us in Rwanda, and so we were very excited to finally be planning her visit.  The other young woman, Tova, is a second cousin of mine, but I don’t think I’ve ever met her.  We were a little hesitant to welcome someone totally unknown into our house for a couple months, despite our knowledge of her stellar genetic heritage.  Some people have a very difficult time in a foreign context, and therefore take a lot of energy to host.  With a new baby, I wasn’t sure it would be a good idea if she turned out to be that kind of person.  Her parents assured us, “she is great, you’ll love her.”  (But they are her parents, of course they think that.)

Its hard for me to express how wonderful it has been to have one or both of them here for the last three and a half months.  If you read this post, you know that its been a difficult time.  They both fit quite nicely into our little family.  They helped cook, do dishes, and were just another grown-up person that I could talk to about the mundane, day-to-day things.  They have helped so much with Beatrix.  Beatrix adores both of them. 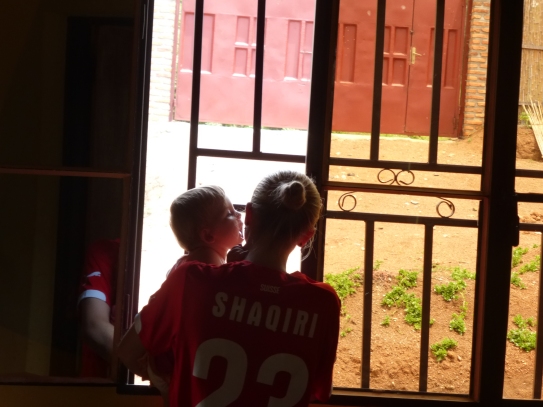 She would get so excited each morning when she heard movement from the guest room, and knew that her friend was coming.  Our good night ritual can’t be the same now (she looks around, and I am sure she is thinking, “where are my fans to wish me goodnight?”)

They  both came up with creative 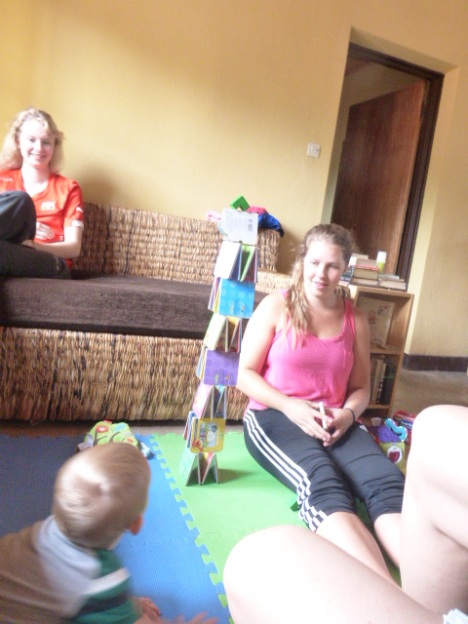 building towers for Beatrix to knock down.

games and activities to do with her particularly at a time when I have not been terribly creative or fun, and she needs it.  They watched her develop and cheered on each new achievement with us.  They helped her learn things, like drinking from a cup, turning book pages, and climbing up onto the couch.  (Um, the last one I’m only partly pleased about.)  Tova also traveled to Kigali and spent the week looking after Beatrix so that I could teach in the Discipleship Training School. 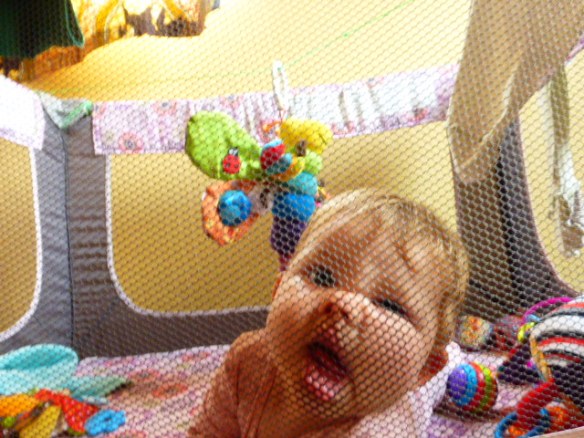 Beatrix liked this game.  I thought it was pretty funny, too. 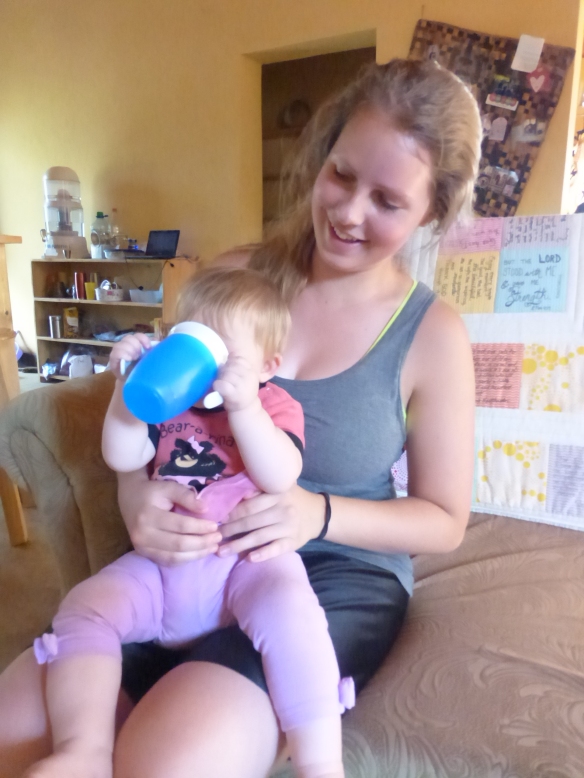 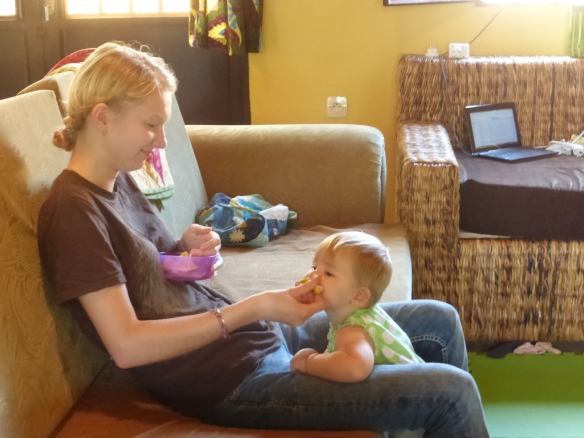 Mike and I did our best to get the girls out to do different things as much as we were able, so I think that it was generally a good experience for them.  (Sadly, Tahlia got to do less than we hoped because things kept getting cancelled or changed.  However, that in itself is probably a realistic experience of missions, particularly in a warm-weather culture. 😉 )

1 thought on “Visitors (Or, The People Who Have Saved my Sanity, part 1)”